Why golf fans are happier than any other sports fans, per new survey 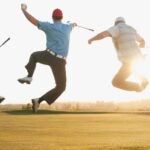 Golf fans are both happy and engaged in the sport, a recent survey revealed.

Golf fans are the happiest of any sports fans, according to one new study. A survey of 6,530 sports fans worldwide by UK-based golf equipment superstore Golfsupport conducted an analysis of their fan satisfaction rating, YouTube video like-to-dislike ratio and social media engagement — and golf came out on top. Additionally, Golfsupport calculated the average for the 10 most recent videos on each of the sports’ most subscribed and relevant YouTube channels to determine the like to dislike ratio, and then analyzed each sport’s main Instagram account’s engagement rate from fans. This data was converted this into a total score out of 10, and contributed to the total happiness score out of 100.

With a total happiness score of 90.8/100, golf fans topped the list of ten sports. Golf fans also had the highest fan satisfaction rating, with 90.3.

Other sports in the survey included tennis, baseball, basketball and football, with soccer fans coming in as the unhappiest of the bunch. Check out the chart to the left for the full results.

As a four-year member of Columbia’s inaugural class of female varsity golfers, Jessica can out-birdie everyone on the masthead. She can out-hustle them in the office, too, where she’s primarily responsible for producing both print and online features, and overseeing major special projects, such as GOLF’s inaugural Style Is­sue, which debuted in February 2018. Her origi­nal interview series, “A Round With,” debuted in November of 2015, and appeared in both in the magazine and in video form on GOLF.com.